THE UNEXPECTED GIFT by Madeline Hunter
Jenna Waverly has closed her inn, anticipating a blissfully quiet Christmas, until a snowstorm brings the first of several strangers to her property. Lucas Avonwood, as charming as he is secretive, is on a mission to track down a scoundrel, but the inn’s lovely owner is giving him a more compelling reason to stay . . .

WHEN WE FINALLY KISS GOOD NIGHT by Sabrina Jeffries
When Flora Younger first met Konrad Juncker, she thought she’d found her match, only to have her hopes dashed. Konrad is now a famous playwright whose plays Flora has secretly panned in reviews. But a chance meeting in a secluded inn may help them rewrite this star-crossed romance . . .

WHEN STRANGERS MEET by Mary Jo Putney
Kate Mcleod is shocked to find that her fellow guest in the snowbound inn is the dashing soldier who may or may not be her husband. Daniel Faringdon barely remembers that long-ago night when he rescued her from disaster, but the desire they discover now will be impossible to forget, or to ignore . . . 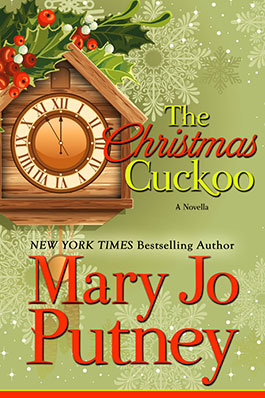 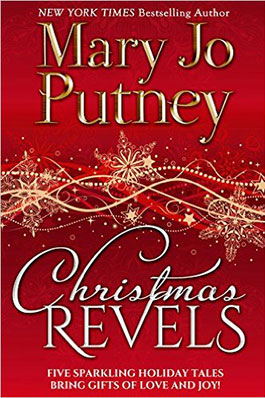 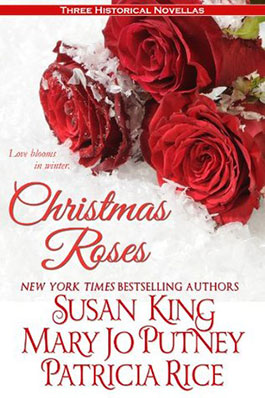 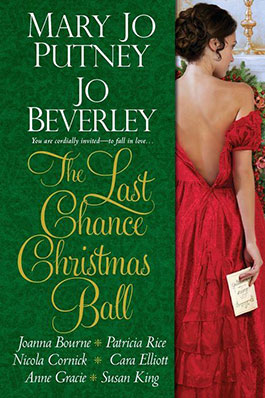 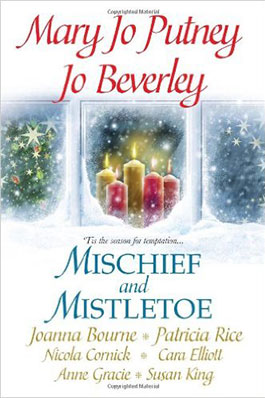 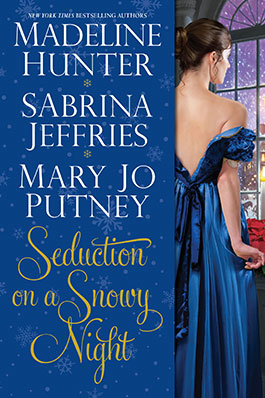 The carriage slid sidewise in the soft snow, and Kate Macleod swore with a fluency that would have done her Scottish grandfather proud as she grabbed for a hand hold.  Her guard, Craig, always said that the musket ball in his arm that he'd acquired at the battle of Salamanca made him a champion weather predictor.  He'd predicted that any snow they would encounter would be slight, but he'd missed the ice storm coming on the heels of the snow.  The road was slippery and getting worse quickly.

The carriage lurched again. Outside the swirling snowflakes made it difficult to see much of anything.  A good thing her maid Bridget had stayed home with a streaming cold.  She wasn't a good traveler at the best of times, and the lurching carriage would have had her pulling out her rosary and praying.  Loudly.

They crested a hill and a blast of wind shook the vehicle.  At least if they went over, they'd land in soft fresh snow.

Kate knocked on the hatch in the roof, and a moment later, it slid open and showed Craig's worried face.  "Do you know if we'll find an inn along this road, the sooner the better?" she asked.

"I asked at the last change of horses and there should be one soon, Miss Kate.  The White Rose."  He grimaced. "The snow is bad enough, and the ice is worse."

"Since you acquired that musket ball in Spain, it may work not work in winter weather,' she said.  "Do your best to get us all there safely."

"Aye, that we will."  The hatch slid closed.

The carriage lurched again as they headed down the other side of the hill.  Kate grabbed the handhold again and hoped they would all reach the White Rose in one piece.  Battered by the wind, the carriage lurched slowly onward.  Until it crested another hill and a blast of wind shoved the vehicle so it slid out of control.  Craig shouted, "Hang on, Miss Kate!"

A blast of wind sent snow down Daniel Faringdon's neck despite the scarf wound around most of his face.  He swore.  "I'm rethinking my decision to ride rather than travel by coach."

"A carriage wouldn't be any better, just different," his companion, Robert Matthews, said dryly.  "Look at that carriage on the hill ahead. The wind is pushing it all over the road.  Passengers must be seasick by now."

Daniel squinted at the small vehicle that was barely visible through the blowing snow.  "What we really should have done was stayed in London till spring arrived," he said morosely.

"You wanted to get this journey over," Rob pointed out.  As Daniel's long time friend, companion, valet, and whatever else needed doing, he also functioned at Daniel's conscience when required.

As usual, Rob was right. Daniel's unexpected inheritance of the Elland barony and property had come with a raft of unwanted responsibilities.  The sooner he visited his family, the sooner he could stop worrying about how unwelcome he'd be.

Rob swore and Daniel saw that the carriage ahead had swerved off the road, probably skidding on the ice. Now it seemed to be stuck.

"At least the carriage didn't smash so with luck, no serious injuries," Daniel observed.  "Maybe with our help they can get on the road again."

"And if we're really lucky, maybe they'll know where the nearest inn is," Rob said dourly.

"Agreed," Daniel said as he tightened his scarf around his face.   "It will be getting dark soon so we need to find a place for the night."

By the time they reached the stranded coach, the driver and a guard were outside and trying to get the vehicle unstuck.  Daniel waved as they approached.  "Can we lend a hand?"

Both men turned and the smaller one said, "A hand would be welcome, or better yet your horses.  If we can rig a harness, they might be able to pull the carriage free."

Daniel swung from his horse and Rob did the same.  "We'll do what we can.  Were any passengers injured?"

"No, the lady is fine." The man chuckled.  "I had to restrain her from getting out to help." He offered his hand.  "I'm Craig and this is Howell."

Daniel hesitated. Should he say Faringdon or Elland?  He still wasn't used to being Lord Elland, so he'd stay with his real name. "I'm Faringdon and this is Matthews."

Howell nodded. "I carry ropes and other useful bits for this sort of emergency so we should be able to rig up a harness that will let your horses tow the carriage free."

Daniel saw movement behind the carriage window, but the glass was so iced up that the lady was no more than a pale oval face.  She was probably praying that the carriage could be freed so she wouldn't have to walk to shelter.

Howell was experienced in rigging harness so it didn't take long to turn the riding horses into tow horses.  A couple of good pulls and the carriage was back on the road.  As Howell checked the condition of his team, Craig said, "Thank you kindly, sirs!  If there's anything we can do for you?"

"Do you know if there's an inn nearby?" Daniel asked.  "The nearer the better!"

Howell spoke up. "Aye, the White Rose is less than half a mile from here.  It's not a major coaching inn, caters mostly to private carriages.  But it's a snug place to bed down for the night."

"As long as it's warm and there's food and drink!" Rob said fervently.  "It's on this road?"

"It's on a lane off to the right.  It would be easy to miss in this weather.   Follow us and we'll lead the way."

The coach started off again, being driven with caution.  Daniel and Rob followed.  They would never have found the inn if not for their guides.

"Our good deed repaid," Daniel remarked as they followed the carriage along the rutted lane. "We never would have found the inn in this snow."

The outlines of a wide half-timbered building emerged from the blowing snow.  The stables and carriage house were at the right end of the inn, and the wide doors were open.  The carriage had been parked in the courtyard and was rapidly being covered with snow.  Presumably the lady in the carriage had been ushered safely inside.

Daniel and Rob dismounted and led their mounts into the stable, where Craig and Howell were grooming and feeding the team that had pulled the carriage.  It was a relief to be out of the wind, and the warmth and scent of the horses were welcoming.

The newcomers were approached by an old man with white hair and beard and an unlit clay pipe clenched in his teeth.  "I’m Peter, the head ostler."  He cackled. "The only one at present."

"I'd say good day, except that it's a miserable day out there," Daniel said. "Do you have room for two more guests?"

Peter pulled the pipe from his mouth. "The inn is officially closed for Christmas, but the mistress won't let anyone freeze to death in the cold.  Not much food and the only servants are me and me granddaughter so not much service, either." The ostler's eyes glinted.  "If that don't suit, there's another inn ten miles or so north."

"The White Rose will suit us very well, Peter," Daniel said, having dealt with far worse accommodations in the past.  "What stalls do you want us to use?"

"Down there, take your pick."

The stables were dim, but there was hay and bedding and everything else needed to make horses comfortable.  Daniel found it soothing to groom his mount, who'd certainly earned some pampering after his stalwart efforts on the day's journey.

Rob was equally busy with grooming and feeding.  After they'd provided hay and water and horse blankets, he said, "Time to see just what they have in the way of food and drink."

"Anything warm will do, and I can heat it up myself if necessary," Daniel said.  "I hope they haven't run out of provisions, because with this weather, we'll probably be here for at least another day."

"Bound to be better than camping out under a tree."  Side by side, the men headed indoors.

Once they stepped inside, they took off coats, hats, and scarves, shaking off the snow before hanging their garments on pegs.  "Time to find the mistress of the house."  Daniel stepped into the narrow passage that ran through the house, and was immediately drawn into the kitchen on the left.  It was warm and well lit and there was a pleasant scent of soup in the air.

A petite, dark haired young woman glanced up from the pot she was stirring.  "I'm Alice, sir.  Are you looking for lodging?"

"That we are.  I'm Faringdon and this is Matthews.  Do you have space for two more guests?"

"We're close to full up, but we have a good sized room with two beds."  Alice added a handful of dried herbs to the soup.  "I'll check you in and take you to your rooms in a few minutes, when I've finished seasoning this soup.  There's tea if you want it while you wait."

She nodded toward the table on left right.  A large teapot was warmed by a knit blue cozy and several mugs, sugar, and a cream pot sat beside it.

A young lady sat at the end of the table clasping a mug of tea in both hands for warmth.  She was well dressed, if somewhat bedraggled, and Daniel guessed that she was the passenger from the carriage.  She was a striking young woman, though. Somewhere in her early to mid-twenties, with rich auburn hair and a face that was rather more than pretty.

She glanced up with a friendly smile, one refugee from the storm greeting two more.  Then she stared at him, her face shocked.

After a long moment, she clattered her mug onto the table and leaped to her feet. "YOUUU!!!!" she spat out, her hazel eyes golden with rage.  "Daniel Faringdon, yes?"

He blinked, equally distracted by her rage and her very fine figure.  "I am.  Do I know you?"

If she'd been a cat, her tail would have been lashing.  "Have you forgotten that you married me seven years ago in Bombay?"