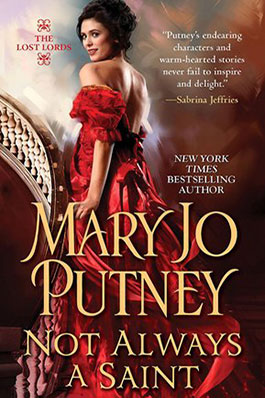 Not Always A Saint

After the death of his sweetheart when he was at university, Daniel Herbert buried his grief in medical studies and his passion for healing. Viewed as a saint by those who know him, in his own mind he never quite manages to live up to his own high standards.

Most men would be thrilled to learn they've inherited a title and estate from a distant relative, but Daniel is appalled because the burden of wealth will interfere with his medical calling. Warily he accepts that he must enter society and seek a wife—a sensible woman who can oversee his properties, leaving him free to continue his work. He does not expect to become intoxicated by a woman called the Black Widow, who is as mysterious as she is shockingly beautiful…

Jessie Kelham’s looks have always been a curse. Now alone with a young daughter and a perilous secret, she is in need of protection. But dangerously attractive Daniel Herbert is not the kind of husband she has in mind. If he recognizes her, the demons of her past will surely erupt. Yet they cannot keep apart—and soon they are drawn into a union that may bring joy—or shattering danger…

Books in The Lost Lords Series 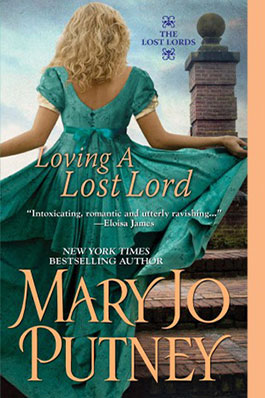 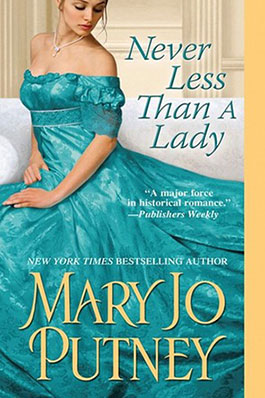 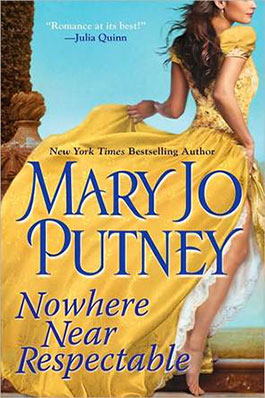 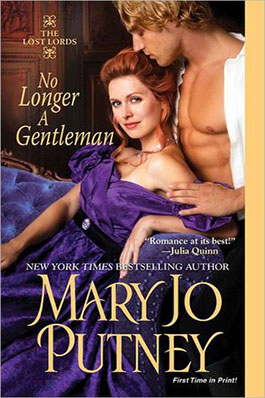 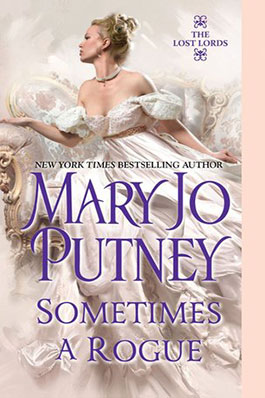 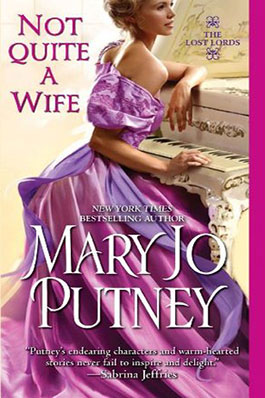 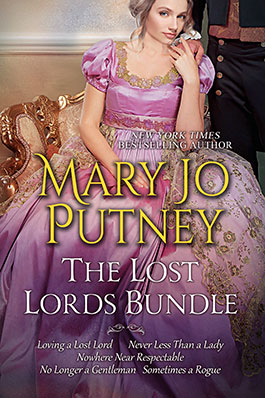 Daniel Herbert, brother of Laurel, the heroine of Not Quite a Wife, was shocked and not pleased to learn that he inherited a title and property from a distant cousin. A dedicated surgeon who runs a free clinic, he has no desire to become a landed gentleman, so what he needs is a wife who is an experienced manager. Reluctantly he goes to London to find such a woman. His sister and her husband, Lord and Lady Kirkland, undertake to introduce him to society.

Daniel's brows arched as they joined a line of coaches waiting to discharge passengers at the Mayfair townhouse. "Are you sure this rout is necessary?"

His sister laughed. "An hour spent here will simplify your life later. You'll have a chance to be seen and to meet others. Once it's known that you're an eligible lord, you'll be receiving invitations to every fashionable function in town."

"Kirkland warned me about that," Daniel said dourly as their carriage stopped in front of the townhouse. A footman opened the door and flipped down the steps. "I'm beginning to wish I'd refused Kirkland's excellent tailor and worn my unfashionable Bristol attire instead. Looking shabby might give some of the huntresses pause."

"Since you're titled and eligible, you could wear untanned bear skins and be considered delightfully original rather than unsuitable," Laurel said with amusement. "James and I will defend you if necessary, but I've seldom seen you lose your composure under any circumstances."

"You don't want to look shabby and provincial," Kirkland remarked. "Superb tailoring is a kind of armor because people see your surface, not the real you. Better to appear worldly and formidable rather than vulnerable."

Intrigued, Daniel asked, "Is that why you're always so impeccably turned out? Yes, of course it is. You're hiding in plain sight.""And very effective it is." Kirkland climbed from the carriage, then turned to assist Laurel, who was graceful in a flowing green silk gown that only hinted at her pregnancy.

"I've learned to do the same," Laurel said seriously. "If I dress like a countess, few people will look more closely. Tonight you look intimidatingly grand and rather unapproachable. Not like easy prey."

Daniel's mouth quirked as he joined them at the entrance to the house. "You're making me feel like a sheep being tossed into the middle of a wolf pack."

"If so, you're a sheep with well-developed defenses," his sister said with a smile. "But it won't be that bad. You can eliminate the misses just out of the school room right away since most would bore you senseless. But you'll meet young women who are more mature. Or you might find a suitable widow who knows more of the world."

"I'm keeping my expectations low," Daniel said as a footman admitted them to the crowded foyer. "If I meet a woman who can run the Romayne properties and leave me free to practice medicine, I may make her an offer on the spot."

Laurel shook her head. "I do hope that reality makes a hash of your sober intentions."

Kirkland laughed. "That so often happens. I was sure I wouldn't marry until I was old, over thirty, until I met you. But I think Daniel is more likely than most to keep his head despite the social whirl."

Daniel agreed. Low expectations. All he needed was a pleasant, honest, capable woman with whom he might have a family.

Children. He glanced at his sister's expanding waistline. He knew how much she wanted this baby, and he was startled to realize how intensely he wanted children himself. He'd been too busy to consider that in the past, but now--the time to start a family had arrived. If he didn't do it now, he'd slide into permanent bachelorhood.

Daniel's tension increased as they joined the receiving line, the three of them one small part of a flowing mass of chattering people. Shyness wasn't part of his nature. In Bristol, he moved easily in every rank of society. But this was a new phase of life, one he wasn't yet reconciled to.

The main drawing room was packed almost solid with chattering humanity. Elaborate chandeliers added to the heat and the atmosphere was thick with the scents of bodies and perfumes. Laurel said grandly, "Daniel, welcome to the lion's den!"

He laughed. "The Biblical Daniel survived, and so shall I. Though I'd prefer real lions. They're cats, after all, and I like cats."
"Lions are more benign than some of the guests here," Kirkland observed. "There are refreshments in the room to the right, but the tables will be mobbed and there's better food at home. I advise moving steadily toward the exit at the far end. Along the way, we'll introduce you to anyone we know. Once we reach the exit, we can escape."

"A good plan," Daniel replied as he wondered how long it would take to move through the crowd.

Unfortunately, Kirkland knew everyone, which made their progress slow. Daniel was impressed at how confidently his quiet, reserved sister moved among the chattering masses. She'd grown comfortable in her role as a countess.

She'd also been right that this crowded, noisy rout would be a good place to meetLondon society. Daniel was introduced to politicians, dandies, social leaders, and those who apparently cultivated eccentricity as a way of life.

As with Lord Childe, the politicians tried to discern his political leanings and females evaluated him for his romantic potential, marital and otherwise. The eccentrics dismissed him as too dull to be competition for creating the next sensation and hence unworthy of attention.

Despite the noise and crowding, Daniel enjoyed it more than he expected. He found people endlessly fascinating, whether rich or poor, and this parade of humanity offered entertaining material for study.

But he didn't like being an eligible titled gentleman, which was indeed defined as "prey." He found himself automatically retreating into cool detachment. He was polite, but made sure he said nothing that could be construed as encouragement.

For tonight, he'd concentrate on memorizing names and faces for future reference.

They were barely halfway across the room before he began to cast longing glances toward the exit. At this rate, it would take another hour to reach it.

Repressing a sigh, he shook the hand of a man Kirkland had just introduced. The fellow was a member of Parliament from Yorkshire with a blunt, witty way of speaking. They exchanged a few words before moving in different directions, but Daniel was sure they'd meet again and speak at greater length. He mentally rated about forty percent of the people he'd met as interesting and worth knowing better. This promised well for his future time in London.

During a brief lull while both Kirkland and Laurel were chatting another couple, Daniel scanned the room. Though his height meant he regularly banged his head when he visited patients in cramped hovels, being tall was an advantage in these circumstances.

Was that Lord Castlereagh, the foreign minister, engaged in earnest conversation on the left side of the room? Kirkland would know, and would probably want to introduce them. Daniel was bemused by the fact that the most significant aspect of his unwanted inheritance was not money or property, but the political power that came with a seat in the House of Lords. In some circles, that was more valuable than rubies.

He repressed a sigh. Estate management could be delegated to capable stewards, but not his political responsibilities. Britain needed reforming in many areas, and it was being driven home to him that he was in a position to make a difference.

His gaze again shifted to the exit where people were trickling out. Most were probably heading to another entertainment.

His eyes narrowed. Was that Alexander Randall from the Westerfield Academy? Randall had been a class ahead, but they'd sometimes been confused with each other because of similar height, build, and blond coloring.

Given the uneven lighting in the drawing room, Daniel wasn't sure of his identification, but if the man was Randall, he looked a lot happier now than in his student days. He'd planned to enter the army, and Daniel wondered how that had worked out. Kirkland was a classmate of Randall's and presumably would invite the other man to the promised old boys' dinner. Daniel looked forward to catching up on the lives of men he'd known when they were all boys.

Daniel started to turn back to Laurel and Kirkland, then paused, his gaze caught by the profile of a woman standing near the exit, mostly surrounded by men. Her glossy dark hair was knotted up to reveal her graceful neck and the ivory perfection of her features. But there were other lovely women here. As he tried to analyze why she caught his attention, she turned a little, bringing her face into the warm light of a chandelier.

Coup de foudre. A lightning strike burned through him, paralyzing every fiber of his being. She was truly beautiful, with striking light eyes edged in darkness and a lithe figure what would shatter a stone saint, but what made her stunning was more than physical beauty. She radiated mystery and sensuality. And danger.

She looked like original sin--and he craved that promise of reckless passion as intensely as Adam had craved Eve's apple.

As his heart hammered in his chest, he knew that he was officially insane. How could the sight of a woman he'd never met affect him so? Then she turned her head further as if she felt his stare, and their gazes locked.

Lightning struck again, swift and fierce, setting his heart afire and searing through his veins. She was exactly the sort of woman he didn't need, yet he wanted her.