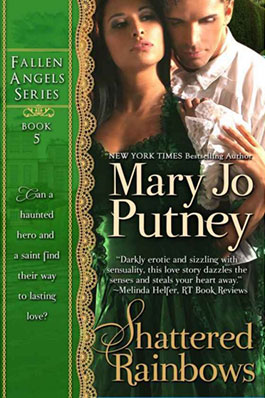 Honed by danger and haunted by the past, Lord Michael Kenyon finds it easy to risk his life for his country’s sake. But in the shadow of Waterloo, he faces a far more dangerous threat—the loss of his heart to the beautiful battlefield nurse who saves his life, yet can never be his.

Called a saint for her virtue and selfless courage, only Catherine Melbourne knows the tragic flaw at the core of her spirit. In Michael Kenyon, she sees the strength and kindness she craves, yet for honor’s sake she must conceal her love and send him away. Even when freed from her empty marriage, she conceals the truth because of the bleak knowledge that she can never again be any man’s wife.

Then fate offers Catherine a fortune, a title, a heritage for her daughter—if Michael will impersonate her husband on a visit to a wild Cornish island. Reluctantly he agrees to the masquerade. But what begins as a simple journey leads them into a shattering vortex of danger and betrayal—and a fiercely passionate love that can no longer be denied.

Although many historical romances have used the backdrop of the Napoleonic Wars and the Battle of Waterloo, Putney’s description of the actual battle is electrifying…Books of quality such as Shattered Rainbows can only raise the standard for all romance novels. This is one of the best books of this year or any year.

Ms. Putney makes me proud to be a romance reader. She writes beautiful stories about mature people with complicated lives and emotions that draw you in and will not let you go. 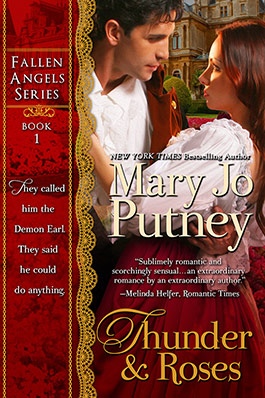 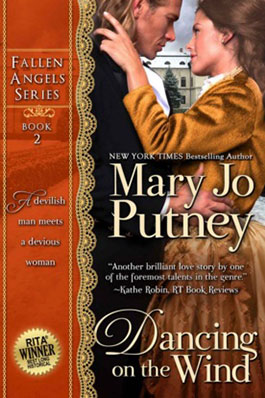 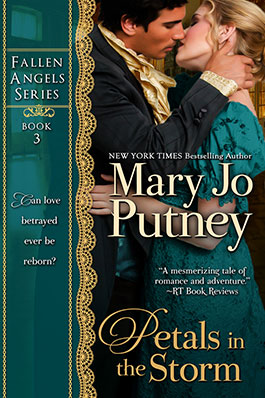 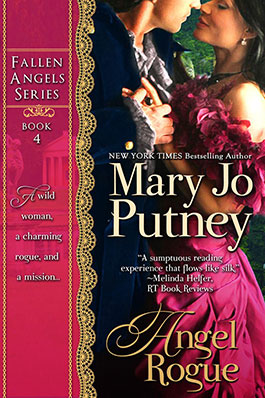 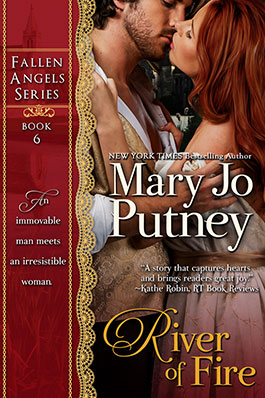 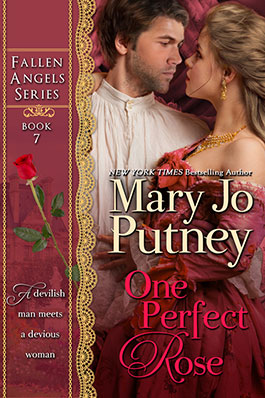 She needed a husband, and she needed one fast.

Choking back a hysterical laugh, Catherine Melbourne glanced over her shoulder at the building she had just left. The sight of the solicitor's office instantly sobered her.

This was not a dream. In the last half hour, she had acquired a grandfather she'd never heard of, and the chance for a legacy that would make all the difference in the world. Instead of having to seek employment that would barely support her and Amy, there would be enough money to live in comfort. There was also an ancient home, an island, a heritage. Her daughter would have the future she deserved. There would be responsibilities as well, but that was all right. Catherine had been bearing heavy responsibilities all her life.

There was only one problem. She must convince her newfound grandfather that she and her husband were worthy of being the next Lord and Lady of Skoal. She felt hysteria rising again, this time without laughter. What could she do?

Her mouth tightened. It was perfectly obvious that she was going to lie. The time to admit that Colin had recently died had been in Mr. Harwell's office. But the solicitor had said bluntly that her grandfather would not consider Catherine as his sole heir. Torquil Penrose, the twenty- seventh Laird of Skoal, did not believe a woman worthy of ruling his island. She would have to find a man to play the role of her husband, and do the job well enough to persuade her dying grandfather to designate her as his heir. But who could she ask?

He had been a good friend, with the vital qualification that he had never fancied himself in love with her. At their last meeting, he had also given her carte blanche to call on him if she ever needed help.

She knew exactly where to find him. As the son of a duke and a war hero, he was mentioned regularly in the society news.Lord M— K— is in town for the Season as a guest of the Earl and Countess of S—. Lord M— K— was seen riding in the park with Miss F—. Lord M— K— escorted the lovely lady A— to the opera. Catherine had read the notices compulsively.

If Michael was willing to help, she would have to spend considerable time with him, which meant rigidly controlling her feelings. But she had managed that the previous spring in Brussels. She could do it again.

Far worse was the fact that she would have to lie to him. Michael felt that he owed her a great debt. If he learned that she was a widow in dire financial straights, it was possible, even probable, that he would think the best assistance he could offer was marriage. The thought gave her a peculiar fluttering sensation somewhere under her ribs.

But Michael would never accept the kind of marriage she had had with Colin. No normal man would. Nor could she reveal her horrible failing; the mere thought made her stomach knot. It would be simplest, and safest, to let him think Colin was still alive.

It was a long walk to Mayfair. But the time she got there, she would have her lies ready.

After a day full of wretched shocks, Michael Kenyon walked into Strathmore House and was given a card by the butler. “There is a lady waiting to see you, my lord.”

Michael’s immediate reaction was unprintable. Then he glanced at the card. Mrs. Colin Melbourne.

Good God, Catherine. It only needed that. Yet the thought that she was here, under this roof, made him so impatient that he barely took time to ask where she was waiting. As soon as the butler replied, Michael strode to the small salon and swung the door open. “Catherine?”

She was gazing out the window, but she turned as he entered. The simple style of her dark hair and her modest gray gown only emphasized her beauty.

When they had parted, he had uttered a silent prayer that they would never meet again. He had spent considerable time and energy in the last year trying to forget her. Yet now that she was here, he didn’t give a damn how much it would cost him later; seeing her was like a breath of fresh air in a coal mine.

She said uncertainly, “I’m sorry to bother you, Lord Michael.”

He spent a moment mastering himself, then crossed the room. "Are we on such formal terms, Catherine,” he said easily. "It's good to see you. You're as lovely as ever.”

He caught her hands, and for a precarious instant he feared he would do something unforgivable. The moment passed and he gave her a light kiss on the cheek. The kiss of a friend.

Releasing her hands, he withdrew to a safe distance. “How is Amy?” Deliberately he forced himself to add, “And Colin?”

Her tone was neutral, as it always was when she referred to her husband. Michael admired her quiet dignity. “I am forgetting my manners,” he said. “Please, sit down. I’ll ring for tea.”

She looked down at her clasped hands. Her profile had the sweet clarity of a Renaissance saint.

“I’d better state my piece first. I need some rather unusual aid. You—you may want to throw me out when you hear what it is.”

“Never,” he said quietly. “I owe you my life, Catherine. You can ask anything of me.”

“You give me more credit than I deserve.” She looked up, her amazing aqua eyes piercing in their frame of dark lashes. “I'm afraid that. . . that I need a husband. A temporary husband.”