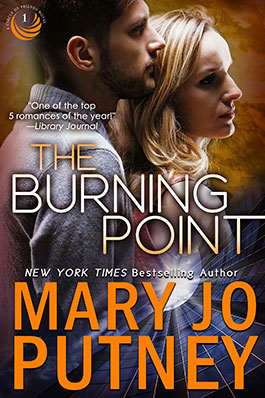 A Circle of Friends Series #1

Kate Corsi always dreamed of working for her family’s world famous explosive demolition business—a wish her old-fashioned father denied until the day he died. According to his will, Kate will receive a fortune while her ex-husband, Donovan, will inherit the family business. But only if they agree to live under the same roof for a year.

Forced into a reluctant alliance, Kate and Donovan must discover the truth about her father’s death—and confront the past that almost destroyed them both. And as they face their shattered dreams, their wrenching secrets and bitter resentments, they find themselves sliding perilously toward the burning point where passion catches fire once more….

The Burning Point was listed as one of the five best romances of the year by Library Journal.

Ms. Putney takes a taboo issue and creates a poignant tale about forgiveness and the awesome power of love… I could not put it down.

Known for her historical romances, Putney successfully moves into contemporary fiction….This passionate love story unravels gradually, in trademark Putney style.  The author has created a realistic, well-crafted story, laced with elements of suspense and mystery and featuring sympathetic protagonists whose biggest mistake was marrying too young.

THE BURNING POINT is more than a love story, it is a story of the emotional change and growth that is sometimes necessary before people can accept and forgive not only the imperfections and failings in others, but in themselves, as well….Mary Jo Putney’s first foray from her usual genre of Historical Romance into the world of Contemporary Romance is an admirable success.

Where there's passion, there's a burning point, and Mary Jo Putney's gift of writing leads her readers to it every time. Without a doubt her readers will gather to the brightness of this passionate fire.

Set against the backdrop of demolition work and a question of sabotage, this gripping story sizzles with passion and danger, but is ultimately about healing and forgiveness—not only for others, but for ourselves as well. Mary Jo Putney will no doubt gain new fans with this book.

Mary Jo Putney turns a deep social issue that impacts families and relationships into an intriguing tale that is both thought provoking and realistic. (Her) first contemporary romance is a winner by anyone's definition of the word.

A Circle of Friends Series 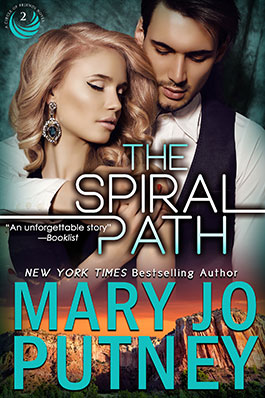 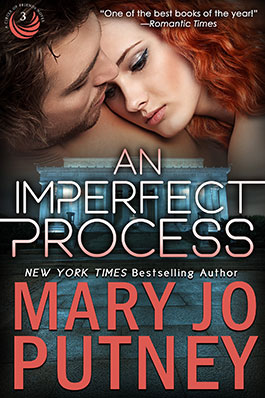 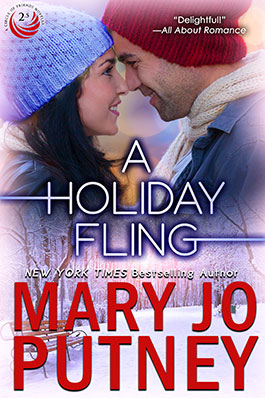 After the funeral of Sam Corsi, Kate's father, lawyer and family friend Charles Hamilton has asked her and her mother Julia to join him for a discussion of Sam's will.

Oscar rose from his warm spot by the fire and trotted over to greet the newcomers, tail wagging. Kate bent to stroke the silky fur. Old Oscar seemed to remember her, even after so many years. Then she straightened and saw a fourth person pacing restlessly at the far end of the room. Donovan.

She froze, her pulse spiking. A good thing she'd broken some very thick ice by speaking to him earlier. Otherwise this unexpected meeting would be unbearable.

He gave her a casual nod, but he was fidgeting with a half-empty glass, less relaxed than he pretended. She inclined her head as if expecting him, and took a seat as far away as possible. Actually, his presence made sense. Sam had probably left his former son-in-law a piece of the company, since Donovan had been a much more satisfactory "child" than either Kate or her brother, Tom. He'd stayed and worked in the business, providing the affection and companionship that Sam had wanted.

For the thousandth time, she thought that it was a great pity that neither of Sam's children had turned out as he'd hoped. It was an even greater pity that he hadn't been able to accept either of them as they were.

After Julia and Kate settled themselves, Charles said, "It's late, we're all dead tired, so I'll get right to the point." His brows drew together as he ordered his thoughts. "Sam's will is unusual. Julia's financial security has already been assured, and of course she'll get this house. A substantial sum has also been designated for charity, and there are bequests for several other relatives. The rest of Sam's financial assets are to be divided equally between you, Kate, and Tom, while Phoenix Demolition will go to Donovan--but only if certain conditions are met."

Kate stiffened, amazed that her father had made her and Tom heirs. This would mean so much to Tom, and not because of the amount of money involved.

She glanced at her former husband, who looked startled and pleased, but also wary. His expression gave her second thoughts. There had to be more to the will, or Charles wouldn't have called this meeting. "What conditions?"

The lawyer gave her a level look. "That you and Donovan live under the same roof for a year."

"Jesus, Mary, and Joseph!" The paralyzed silence was broken by the sound of smashing glass as Donovan dropped the tumbler he'd been holding.

Kate sprang to her feet as waves of horror swept through her, coming from so deep inside that she almost blacked out. "No!" she said in a choked voice. "That's crazy. Not in a million years!"

Her gaze whipped over to Donovan. His stunned face mirrored her own shock.

They were supposed to live together? The thought made her blood freeze.

"The will is entirely legal," the lawyer said. "Including a provision to disinherit anyone who contests it."

Kate closed her eyes, feeling the hammer of blood in her temples. Her father hadn't known why she'd divorced Donovan, of course, and whose fault was that? She had chosen silence over public scandal. Talk about no good deed going unpunished! She began to shake as the swift fury that Sam had called an "Italian moment" swept through her. Opening her eyes, she glared at Donovan. "Did you put Sam up to this?"

"Do you think I'm insane?" His voice rose incredulously. "I'd sooner share a den with a wolverine."

Much as she wanted to rip at him, it was impossible not to recognize his shock, or a revulsion equal to her own. Kate spun to face her mother. "Did you know about this?"

"Yes. And really, Kate, do try to control yourself. You're making a spectacle."

"Good! I want to make a scene." Kate's fists knotted at her sides. "How could you have allowed Sam to draw up a will that's so…so outrageous?"

"Sam was a devout Catholic who believed in the sanctity of marriage," her mother said. "Though you're not Catholic, Donovan is, and you married in the Church. Since the marriage was never annulled, to Sam it still existed."

"Sam could be pretty medieval, but even he knew that divorce was a fact of life," Donovan retorted. "He couldn't possibly have believed that a damned will could resurrect a marriage ten years dead."

Kate couldn't have agreed more. She should have asked for a Catholic annulment. Donovan had never asked for one, and she hadn't wanted to initiate anything that might require communication between them. Her failure to force the issue gave Sam an excuse to claim the marriage was still valid.

Not that her father needed an excuse. Despite his very real faith, he hadn't married in a Catholic ceremony himself because Julia had wanted the rites of her own church. Nonetheless, he was quite willing to use his daughter's Catholic marriage as a bludgeon to get his own way one last time. Bitterly she said, "What if Donovan or I had married elsewhere? Would Sam have expected us to get divorced?"

"I insisted there be alternative provisions in case there was a change in marital status between the time he drew up the will and his death," Charles said. "However, that's moot since you're both single and able to comply with the conditions if you choose."

"If I choose." Kate's seething gaze returned to Donovan. It had been hard enough to speak to him in a room full of people. The idea of living with him was….unthinkable. "Sam didn't know what he was asking."

But Donovan did. From his refuge by the fireplace, he watched her as if she were a ticking grenade. Reluctantly Kate recognized that he had been betrayed as badly as she. Instead of inheriting the business that by right of dedication and hard work should be his, Donovan was being victimized by Sam's last ghastly whim.

Pulling herself together, she said through gritted teeth, "Well, be damned to the money and Sam's attempt to control us from the grave." She headed toward the door.

"Wait," Charles said forcefully. "I know this is a shock, Kate. But remember that if you refuse to comply, it isn't just your own inheritance you're throwing away. Tom will also be cut out entirely, and Sam specified that PDI would be sold to Marchetti Demolition."

Donovan swore when he heard that, and Kate came to a halt. Bud Marchetti was an old friend of her father's and had regularly tried to buy PDI and turn it into a division of his conventional wrecking firm. Sam had always laughed off such offers, but obviously he'd reconsidered.

"I don't blame you for being upset," Julia said quietly. "As you said, the will is outrageous, but Sam never gave up hoping that the two of you would get together again."

"No, but I thought his idea had merit." Her somber gaze went from Kate to Donovan. "Not because there is any chance you two will reconcile. I don't know what went wrong with your marriage, but it obviously left deep scars or you wouldn't both be so determinedly single ten years later. Maybe if you spend a year together, you can come to terms with whatever happened, and get on with your lives."

Restraining the urge to swear violently, Kate bit out, "Never!"

"Note, the condition is living under the same roof, not sharing the same bed. In effect, you'd merely be housemates." Charles spoke as calmly as if they were discussing tax strategy. "Sam went into some detail about what is acceptable. In a hotel, a suite can be used rather than a single room."

Kate's jaw clenched at this evidence of how carefully Sam had plotted this. He must have spent the last ten years figuring out ways to force his daughter and former son-in-law together again.

Charles finished, "Incidentally, Sam also specified that you would live in the home you shared during the marriage, the house Donovan still occupies."

Absurdity piled on insanity! Sensing her distress, Oscar trotted over and began rubbing against her ankle. She stroked his head, her chilled fingers warmed by his small furry body. Straightening, she pointed out, "I'm not the only one who would have to agree to this. Donovan can't be any more willing to cohabit than I am."

Instead of the instant agreement she expected, his expression became troubled. "Kate, we need to talk."