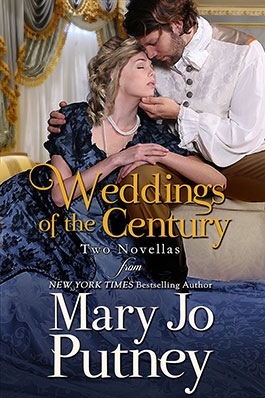 Weddings of the Century: A Pair of Wedding Novellas

Young Dominick Chandler asked for the hand of his beloved Roxanne only to be brutally refused by her father. Ten years later, Dominick returns determined to claim the woman he has never stopped loving, and he'll do anything, no matter how outrageous, to get close to Roxanne again. But is she still the passionate, loving girl who claimed his heart? (Originally released under the title The Devil's Spawn.)

Beautiful Sunny Vangelder is the richest and most admired of the American heiresses who crossed the Atlantic to find a glamorous future in England. Thwarted of her hope to marry for love, Sunny is pressured into marrying a deeply reserved duke. To the world, the Gilded Girl and the Duke of Thornborough are dazzling celebrities, but inside the marriage are two lonely people yearning for love. Can Sunny and Justin find each other amidst the glitter and the gold?

The simple premise is one of my favorites: The First Year of Marriage between Two Very Different People. We see how Sunny Vangelder, an American heiress, and Justin Aubrey, second son turned duke, turn a marriage of convenience into a love match, despite misunderstandings and personality differences.

The writing is vivid, the stories are unique and well developed and the characters have you cheering for their HEA. I enjoyed every moment!

Fun! A writer at play, and the reader enjoys her game.

Lord Justin Aubrey, younger brother of the Duke of Thornborough, has slipped away from the extravagant society fete taking place on the lawns of the family estate.  As he strolls through the gardens, he comes across Sunny Vangelder, a beautiful and much admired American who wants to seem more of the famous palace gardens, so Justin offers to give her a tour.

Sunny gave him an entrancing smile that struck right to the heart. For a mad instant, he felt as if he was the only person who existed in her world. She had charm, this gilded girl, a quality as unmistakable as it was hard to define. He drew a shaken breath and returned his gaze to the winding path.

Though she had said he was easy to talk to, in fact he found himself talking more than usual as they strolled through the park. He told her about the history of the estate, answered questions about the crops and tenants. Together they stood in the gazebo that was designed like a miniature Greek temple, and when they visited the picturesque ruins of an old monastery he described what the community would have been like in its heyday.

She was a wonderful audience, listening with a grave air of concentration that was occasionally punctuated by an incisive question. After she asked about the effects of the agricultural depression on the farm laborers, he remarked, “You have a wide range of interests, Miss Vangelder.”

“Education is something of an American passion. My father insisted that I have a whole regiment of tutors. Shortly before he died, he had me take the entrance exams to Oxford and Cambridge. He was quite pleased when I passed with flying colors.” She sighed. “Of course there was never any question of me actually going to a university. That would have been shockingly bluestocking.”

At least she had been well taught. Like most English girls, his own sisters had received the sketchiest of educations. Only Alexandra, who loved to read, had a well-informed mind. The man who married Sunny Vangelder would be lucky in more ways than one.

Justin had chosen a path that brought them out of the park’s wilderness area right beside the water garden. It was an elaborate series of pools and channels that descended across three levels of terraces before flowing into the ornamental lake.

Sunny stopped in her tracks with a soft exhalation of pleasure. “Exquisite. The proportions, the way the statues are reflected in the pools, the way the eye is led gradually down to the lake. Masterful. And the grass surrounding it! Like green velvet How do the English grow such perfect grass?”

“It’s quite simple, really. Just get a stone roller and use it on the lawn regularly for two or three hundred years.”

She laughed and gave him a glance that made him feel as if he was the wittiest, handsomest man alive. His heart twisted, and he knew that he must get away from her before he started to act like an utter idiot. “I really must take you back now. Your chaperone will be worried.”

“I suppose so.” She took a last look at the water garden. “Thank you for indulging me, Lord Justin.”

Their walk had taken them around three sides of the palace, and it was only a short distance to the Versailles garden where the fete was being held. As they approached the festivities, a tall man saw them and walked over swiftly. It was Paul Curzon, who had been at Eton at the same time as Justin. They had never been more than acquaintances. Curzon had been active in the most social set, while Justin had paid an unfashionable amount of attention to his studies.

After giving Justin a barely civil nod, Curzon said, “Lady Westron has been wondering what happened to you, Miss Vangelder.”

Her face lit up at his words. “I was in no danger, Mr. Curzon,” she said, her voice proper but her eyes brimming with excitement. “I’m an avid gardener, you see, and Lord Justin very kindly showed me some of the lesser known parts of the park.”

In a careless tone that managed to imply that Justin was scarcely better than an under gardener, Curzon said, “You could not have chosen a better guide, for I’m sure that no one knows more about such matters than Lord Justin.” He offered Sunny his arm. "Now I shall take you to Lady Westron.”

Sunny turned to Justin and said with sweet sincerity, “Thank you for the tour, my lord. I enjoyed it very much.”

Yet as soon as she took Curzon’s arm, Justin saw that she forgot his existence. He watched them walk away together, two tall, blond, laughing people. They were like members of some superior race, set apart from the normal run of mankind.

For the first time in his life, Justin found himself resenting Gavin for having been born first. The Sunny Vangelders of the world would always go to men like Gavin or Curzon.

His aching regret was followed by deep, corroding anger. Damning himself for a fool, he turned and headed toward the house. Gavin’s fete could progress to its conclusion without him.