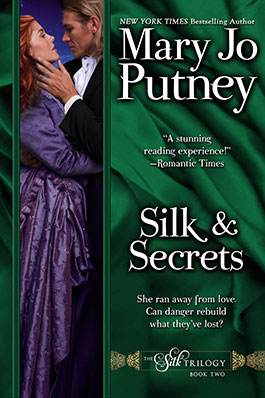 At seventeen, fiery Juliet Cameron fell passionately in love and married the perfect companion for the adventurous life she wanted to lead. Lord Ross Carlisle is handsome, dashing, and as eager to explore the world as she is. But social constraints and fear of an all consuming love that threatens to engulf her independent spirit send Juliet fleeing to the distant land where she was raised as a diplomat’s child.

Now, a dozen years later, a gentleman’s promise sends Lord Ross on a dangerous rescue mission to Central Asia—and to a shocking reunion with his long estranged wife. Warily they join forces to cross the merciless desert to Bokhara, where Juliet’s army officer brother has been imprisoned. The fierce attraction that drew them together so many years before has never died. But if they succumb to passion, can either of them survive if they cannot heal their broken marriage?

Silk and Secrets fulfills every dream of your heart, every yearning of your soul, as a pair of memorable lovers find their way back to each other’s arms . . . This remarkable novel of high adventure and unquenchable love is a stunning reading experience, one you will remember and cherish forever.

...Sheer brilliance. [Silk and Secrets’] historical vibrancy and vitality bring to mind Dorothy Dunnett with a dash of Indiana Jones... Ms. Putney’s descriptions convey both the romanticism and the harshness of the dunes and their nomads.

* Nominated for RWA’s Golden Choice Award for best romance of the year. 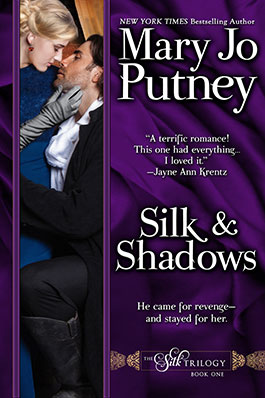 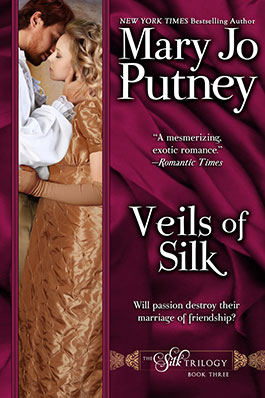 A spin-off of Silk and Shadows, Silk and Secrets is the story of Lord Ross Carlisle, an aristocratic writer and adventurer who roams the wild corners of the globe to escape aching regrets over the beautiful wife he’d loved and lost when they were both too young.

Then a rescue mission to Bokhara brings him face to face with Juliet Cameron, the headstrong, passionate woman who had run away from him to create a place for herself in a savage land. Together they set out to rescue her imprisoned brother—and perhaps rebuild the fractured marriage that is their only chance of true happiness.

Night was falling rapidly, and a slim crescent moon hung low in the cloudless indigo sky. In the village the muezzin called the faithful to prayers, and the haunting notes twined with the tantalizing aroma of baking bread and the more acrid scent of smoke. It was a homey, peaceful scene such as the woman had observed countless times before, yet as she paused by the window, she experienced a curious moment of dislocation, an inability to accept the strange fate that had led her to this alien land.

Usually she kept herself so busy that there was no time to think of the past, but now a wave of piercing sorrow swept through her. She missed the wild green hills of her childhood, and though she had made new friends and would soon dine with a surrogate family that she loved, she missed her own blood kin and the friends who were now forever lost to her.

Most of all, she missed the man who had been more than a friend. She wondered if he ever thought of her, and if he did, whether it was with hatred, anger, or cool indifference. For his sake, she hoped it was indifference.

It would be easier if she felt nothing, yet she could not regret the pain that was still, even after so many years, a silent undercurrent to her daily life. Pain was the last vestige of love and she was not yet willing to forget love; she doubted that she ever would be.

Her life could, and should, have been so different. She had had so much, more than most women ever dreamed of. If only she had been wiser, or at least less impulsive. If only she had not succumbed to despair. If only…

Realizing that her mind was sliding into a familiar, futile litany of regrets, she took a deep breath and forced herself to think of the responsibilities that gave her life meaning. The first lesson of survival that she had learned was that nothing could change the past.

For just a moment she touched the pendant that hung suspended around her neck, under her robe. Then she turned her back on the empty window and the darkening sky. She had made her bed and now she must lie in it.